Jerk from Behind Neck

As mentioned above, the jerk from behind neck is a great assistance exercise for mending a poorly front jerk and even my coach, Mr Tony Cook was advised in his early days that the (jerk behind neck) was the prescribed medicine. I myself have this discipline programmed into my training and absolutely love it for two reasons. Firstly, it has improved my technique, and secondly it has built my confidence in lifting heavier and heavier weights overhead.

Most readers of this article will be familiar with executing a jerk from a rack so I will just go over some key pointers of the jerk from behind neck:

One of the biggest difficulties with the jerk behind neck is controlling the weight back down to your shoulders between repetitions. When the weight is substantially heavier for singles, I find it easier to lower the barbell to my chest rather than back behind my neck, as this avoids the barbell slipping down my back. It’s not so bad with a practice or warm up weight for repetitions, as the barbell can be easily lowered back behind your neck, but generally speaking this exercise is much easier if you take the barbell from blocks rather than a rack. I have to admit that I do occasionally drop the barbell down to the floor when I’m being lazy, but I wouldn’t condone it! Control, control, control! I must learn control I tell myself!

One of the biggest differences I’ve noticed when performing the behind neck jerk is in the dip & drive element of the movement. Ordinarily I would perform this stage like a bouncy ball, bouncing all over the place and ultimately losing all of that momentum gained for the drive. However, since I’ve had this discipline programmed into my training I now see that I need to act more like a coiled spring, i.e. absorbing all that power on the way down and then exploding upwards to lock out overhead. It seems like a strange analogy, but I guess my point is that by performing the behind neck jerk I have effectively slowed down the whole movement to focus on the problem areas, as I know from experience that it’s all too easy to disguise bad form and technique with speed.

Admittedly, my front jerk technique is not as good as it should be and has been a bit of a bug bear for some time. I’ve put it down to lack of practice, but really the biggest hurdle is my confidence. Now being predominately an Olympic style weightlifter, my coach has kindly told me that the theory should be that, if I can get the barbell to my shoulders then I should have no problem locking it out overhead! This has not been so on more than one occasion, during training or at competitions and it can be extremely frustrating, but there is a way to mend this and that is by performing the behind neck jerk. I’m yet to really test the theory, but I have a competition coming up later in the year with the Olympic set of press, snatch and clean & jerk. 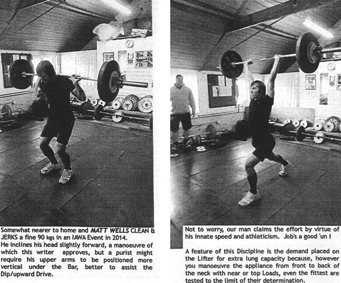 Clean & Jerk from Behind Neck

It has to be said that whoever came up with this must have been on some kind of mind bending substance at the time, but that being said there is an element of joy when a lifter executes this discipline with all the youthful ease of his peers. Not only does this movement require an athletic ability, but also a fair amount of strength to manoeuvre the bar from the chest to behind the neck. Essentially, the lifter performs a front jerk to get the bar into position behind the neck (scraping the back of the neck in the process - if you’re lucky!) and then, once the barbell is nicely nestled on the back of the shoulders, the lifter has to hope that he or she has enough strength left to proceed to finish the discipline by locking the weight out overhead – lunacy springs to mind! There was even someone who came up with the wild notion of performing a Steinborn back squat to get the bar into position (see image below).

I’ve recently had the privilege of performing the clean and jerk behind neck at the IAWA Midlands Allround Champs 2017 and this discipline is met with varying degrees of apprehension. I myself don’t mind this discipline, but once the barbell gets above a certain weight, the thought of popping it behind my neck becomes extremely daunting. There are members of IAWA who prefer this method over the conventional clean and jerk as they can achieve greater overall weights.  Thankfully for yours truly, it only rears its unconventional head every so often in competition and that’s enough for me!

As a closing thought, is the behind neck jerk something you should have in your training? I would say yes! Not only is it an excellent way to build superhuman strength, but it also has all the technical qualities to help improve your front jerk. Equally, if you’re struggling with manoeuvring heavier poundage’s overhead, it’s a sure fire way of building a solid, confident base to lockout that PB or PR.

In my next article I’m going to be looking at the snatch balance and overhead squat and to ask the question, do they really help improve your squat snatch?